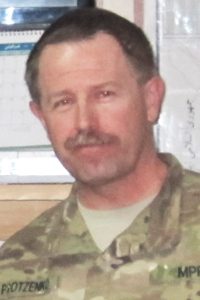 Hometown: Agawam, MA
Family: Paul was survived by his parents, Harry and Beverly of Agawam, MA, his two sisters, and a wife.

Paul dedicated his life to the service of his country and its people. He proudly served in the Army’s 82nd Airborne stationed overseas in Vicenza, Italy, retiring with the rank of Sergeant. Upon receiving an honorable discharge, he spent the next 21 years as a State Trooper. He earned the Life Saving Medal twice during his tenure. Immediately upon retirement from the State Police in 2009, he left for Afghanistan to become part of a Police Mentoring Team that trained the Afghan National Police Force. Paul was stationed for the better part of 2 years in the Panjshir Province of Afghanistan. During this time, he was instrumental in bringing the first Crime Scene Investigation Class to the Afghan National Police Force. This innovative class was well received and written up in the Army magazine, “Stars and Stripes.”

Paul was well known for his sense of humor and dedication to duty and was described by fellow team members as, “strong and steady, while demonstrating profound humility, – the embodiment of a public servant.”  He was killed on July 9, 2011 on the way to the Darah Police Station by an Afghan National Directorate of Security.

He is sadly missed and forever loved by his family.

He was awarded the Defense of Freedom Medal (posthumously) on 22 July 2015.

Matthew A. Pucino
Scroll to top